Kier Infrastructure is once again undertaking its Where’s the Bear challenge and, as part of Kier’s infrastructure supply chain, leading site welfare supplier Garic has stepped in to help them along their way.

A £750 donation by the company will be helping Kier’s challenge to transport Keith, a cuddly black and white panda bear, by ‘non-conventional’ means from Ayrshire in Scotland down to Sandy in Bedfordshire. He will be calling at Kier sites along the way as he is passed relay style between offices including Sellafield, MerseyLink, the M6, Hinkley Point, Castlepoint and Crossrail.

The challenge, which previously raised £32k for the Kier Foundation in 2014, will this year see all monies raised being split between the Alzheimer’s Society and St Luke’s Cheshire Hospice.

So far, Keith’s modes of transportation have included a 17-hand thoroughbred horse, to an equally experienced albeit slower steed, Gordan; a 6-year old tortoise.

“We would have supplied a welfare van for him, but apparently he couldn’t reach the steering wheel!” 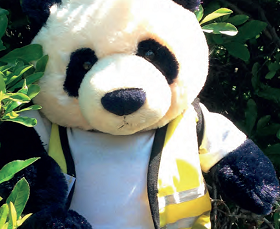