A community project to restore what was the first airport terminal building in the UK, has just taken delivery of a fully equipped Garic welfare unit.

As a leading supplier of site welfare equipment, Garic decided to donate the cabin after the Manchester-based Veterans’ Garage project caught the eye of its sales and marketing manager, Neil Richardson.

The project is the brainchild of ex-serviceman Jayson Redshaw and his brother Dan. Both were inspired to renovate the World War Two Grade ll listed building to create a place where veterans who, like Jayson, are facing the grief and anxieties experienced after active duty, can come together and restore classic cars, motorcycles and aircraft.

Jayson, 27, lost his best friend on the front line in Afghanistan. His vow to help others suffering combat stress has so far seen the garage go from dream to reality; word has spread and companies across the North West have donated their time and services as the huge job of renovating the site gets underway.

Neil said: “As soon as I spoke to Jayson I could feel the passion and energy that was going into this incredibly worthwhile project, so naturally, we wanted to help where we could.

“As well as providing a welfare unit for the teams to use as an onsite office and rest area at break times, we have also supplied one of our brand new hand held dust cannons. This will help to keep anyone in the internal rooms safe from invisible but harmful dust particles as the structure is carefully renovated.

“Help is still needed though. The project is an ambitious one and the immediate needs include more plant and equipment, building materials and general labour. I would urge anyone to help out and go beyond the call of duty where they can.”

The Veterans’ Garage will provide more than just a space for engineering enthusiasts. Crucially it will be a hub where all ages and genders can share a sense of camaraderie and kinship as it is the feelings of loneliness and isolation which are most often felt by personnel reintegrating to civilian life. It will also be a place where they can gain access to help and advice about housing, training and transferable skills, higher education, mental health and wellbeing, alcohol and drug dependency, pensions and even sport and recreation.

Neil concluded: “Personally, I am finding it very rewarding to work with such an amazing group of people. The energy is infectious and you just can’t help but try and get as many people to help as you can. Last week I even found myself talking to Yorkshire Tea; subsequently they have donated all the tea bags needed on site. Now that’s taking welfare to a whole new level!”

If you can help or supply corporate sponsorship further information can be found at www.veteransgarage.co.uk 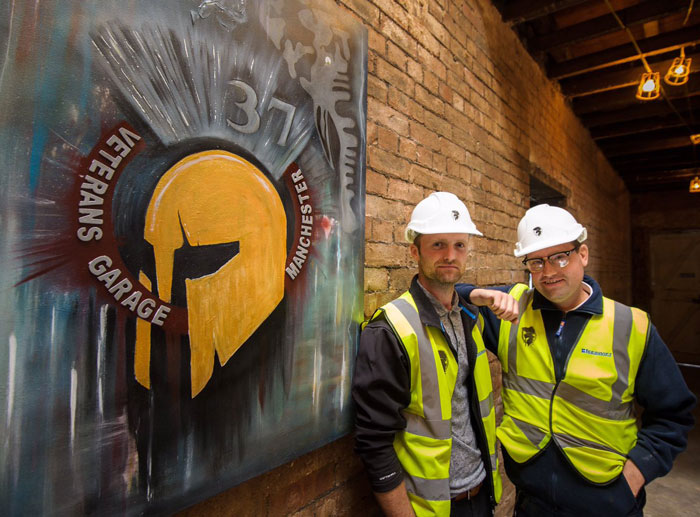