As one of the UK’s leading providers of plant, site set up and welfare facilities, Garic is heading towards the end of the year in a buoyant mood.

Construction industry experts judging the first round of award entries for Construction News’ coveted Specialist Awards have short listed Garic, recognising it as one of the best equipment suppliers in the UK.

To achieve this Garic has shown itself to be a company committed to providing the best equipment innovations available, repeatedly leading the welfare market with its latest product updates and industry firsts.

So far in 2017, Garic has launched a world first, the EcoSeriesPlus 2+1 Drying Room, an entirely self-powered solar amenities block; signed no less than eight exclusive collaboration agreements and invested more than £8m in the business facilitating one of the largest and fastest growing welfare fleets in the UK.

Managing director, Colin Hotchkiss said: ‘Everyone has put in a huge amount of work this year and we have lots to be proud of.

“From the launch of i-SITE, our real-time telematic liquid monitoring system, to the opening of another new depot in Scotland, it’s been an incredibly busy time. To achieve all this is fantastic but to have it endorsed by the construction industry’s leading awards programme is the icing on the cake.

“We’re ambitious and growth is an important part of our strategy so it’s testament to our staff, who are also deeply committed to these values, that we’ve be short listed.

“It’s nearly three months until the next round of judging which involves a presentation and interview with a panel of judges. Before then though we’ll have a few exclusive deals and contract announcements to make so watch this space!”

Construction News’ prestigious Specialists Awards ceremony will be held on Thursday 8th March at the Grosvenor House Hotel, London where the winners will be announced.

For further details and updates on the awards see https://specialistsawards.constructionnews.co.uk/ 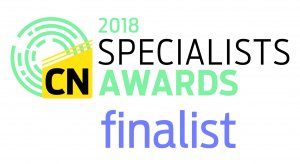