Garic has been celebrating the success of its heroic team of seven who boldly battled 20 other teams at the Gauntlet Games in Manchester. The intrepid gang competed in a 5k race which involved tackling giant inflatables, slides, swings and water obstacles – as well as a few troublesome gladiators.

The Gauntlet Games, one of a series of fund raising activities the leading site welfare equipment provider is undertaking in support of Bury Hospice, proved to a big hit with Garic raising just over £700.

Commenting on the event Gemma Yates, Garic’s charity co-ordinator said: “There were hundreds of people taking part and the ground conditions were rather muddy to say the least. Our magnificent seven pulled together and helped each other over the obstacles. I’m incredibly proud of my colleagues who stepped up in the name of charity and had fun in the process.

“We’ve got lots more fundraising to do to make sure we reach our total for Bury Hospice’s Corporate Challenge so please get behind our next event which will be a cake sale on Friday 29th September – get baking everyone – and on 27th October we are planning a ‘wear yellow to work day’ which should be interesting!” 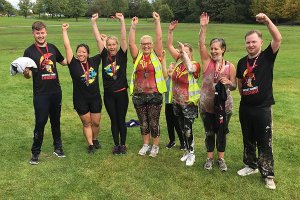